Home About PumpTalk Links of Interest Archives français (accueil)
One Year Comes to an End, and Another Begins...
Let me just say "Way to Go!"

The beginning of January puts us at a crossroads. On one hand, we watch “the year in pictures”, and radio stations play the year’s number one hits.  On the other hand, we make resolutions and plans for the coming year.

I recently received the Centre for Energy’s latest newsletter, containing links to three different reports about energy supply and demand up to 2030. This reminded me that the year-end/beginning is also a time for some institutions to forecast what’s ahead for years to come. If you’re interested in energy forecasts, check out the reports from Canada’s National Energy Board (NEB), the American Energy Information Administration (EIA), and the International Energy Agency’s World Energy Outlook team.

All three reports address issues of “how much”, “what for” and “where from” slightly differently. While I didn’t read the reports in full, I found the following points interesting during my initial scan.

Energy demand will continue to increase, and World Energy Outlook states that about one-fifth of the increase will be due to petroleum-based fuels for transportation needs. And in its reference case, the EIA estimates that world use of petroleum and other liquids will grow from 83 million barrels of oil equivalent per day (2004) to 118 million in 2030.

The reports also say we can improve our balance of economic growth, environmental sustainability, and development of the energy sector.

And we’ve made some strides already. World Energy Outlook reports that while the world’s vehicle fleet is expected to expand (especially in developing countries), fuel economy regulations in some regions have moderated oil demand. 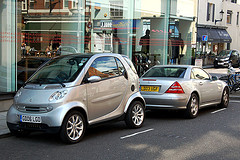 The NEB report adds to this notion, saying that while the total volume of gasoline sold in Canada is still increasing, trends in the types of vehicles purchased are starting to change. In 2006, more than half of Canadian car buyers bought smaller, fuel-efficient vehicles.

“As Canadians plan for the future,” says the NEB, “they will face many decisions about what kind of lifestyle they want to live and how that lifestyle reflects broader issues impacting Canada's economy and environment.”

All of us will make these decisions based on different factors – post a response below and let us know what yours are.