Home About PumpTalk Links of Interest Archives français (accueil)
Let me just say "Way to Go!"
Gas Prices that are so 2007 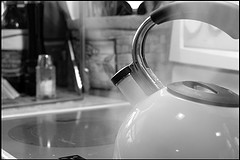 With the January thaw we almost always experience here in Southern Ontario apparently past and the thermometer once again starting to drop, I was waiting for the kettle to boil this past weekend and noticed the condensation forming on my kitchen win

dow.  This reminded me of the distillation process I learned about in high school chemistry, and then of the most basic part of refining crude oil.

When you boil liquid water, you make steam or gaseous water.  As that steam hit my kitchen window, it cooled down, returned to a liquid form and ran down the window pane as liquid water again.

One of the initial steps of refining oil into different petroleum products like gasoline, diesel and jet fuel is not all that different.   (NOTE:   the engineers around here would be squirming if I didn’t admit up front that the risks associated with handling highly volatile hydrocarbons are significant when compared to boiling a kettle, but at the same time it’s the nature of those materials and the fact that they are volatile and can burn that makes them useful as a fuel in your vehicle).

Anyway, having acknowledged the complexity and risk that is part of running a refinery and therefore the related commitment to safety that is also required, boiling water produces only steam.  Crude oil is a mixture of several different hydrocarbons, so the purpose of distillation in a refinery is to separate the basic elements of different petroleum products.

In one of the first steps of refining, crude oil is heated to release the different hydrocarbons into a heated liquid and gaseous form.  This mixture of gases and liquid is then moved into a large distillation tower called a fractionating tower.  Going back to my analogy of a boiling kettle near a window, a fractionating tower is kind of like a series of windows, but the temperature of each is very carefully controlled.

Once separated, there is still a lot of work that takes place to further refine products, and then companies like Petro-Canada incorporate their own proprietary blending and additives to make their products unique. Only then can you provide the high quality fuels and lubricants that people have come to depend on; but at its most basic, the initial stages of fractionating or distilling crude oil is not unlike boiling a kettle of water to make your hot chocolate after an afternoon of skating.