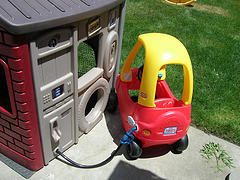 I was just reading the Fuel Focus Annual Review for 2007 for kicks and found a few interesting bits of information about last year's gas prices you might also find interesting.  Or not.  Relax, I only picked 5 things.

There's a lot in the report.  I offer the following 5 items I found interesting

So that was 2007.  I look forward talking with many of you about gas prices and other diversions in 2008 (minus January).

I would like to know how that " Canadian Average is calculated???

My math may be a little rusty but even averaged out over the four years that is a whole lot more than 4 cents???

Thanks M. Sorry for the delay in responding.

The main source for the average Canadian price for gasoline is MJ Ervin & Associates. Not to bore you, but the methodology they use is below. It takes into account the price in numerous jurisdictions and is an average, so it may not be exactly what you paid. The Cdn average gas price (with taxes) for 2007 was $1.02. 2006 was 97.7. 2005 was 92.3.

The gasoline, diesel and automotive propane pump prices are collected directly from individual dealers (gas stations) every Tuesday morning at 10:00 AM local time by telephone. The prices reported in the weekly reports are thus a ‘snapshot’ of the prices on that particular day and do not represent an average of price fluctuations throughout the week. The telephone survey encompasses 38 cities across Canada and includes dealers from the major (branded) oil companies as well as independents. Only self-serve prices are collected for gasoline and a combination of self-serve and full serve prices are collected for both diesel and propane.

Pump prices include all applicable federal, provincial and urban (municipal) taxes as well as sales taxes where applicable. The ex-tax price represents the price of the fuel before any taxes are levied.

If gas prices are a direct result of oil price why is gas so much higher this April 2011 compared to april 2008 when oil was the same price? With many more fuel efficient cars on the road shouldn't demand decrease and therefore lowering the need to refine more oil and decreasing the price of gas? I don't believe that more cars equals more demand, with all the emission regulations and saftey certification regulation fuel cosumption should be reduced if not remain the same. There are many more newer cars on the road today then there ever was, so why are we getting ripped off at the pump?