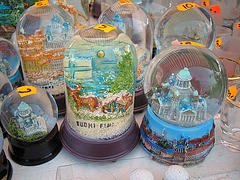 Most of us purchase gasoline at a station close to home.   A flurry of global factors impact the price of crude oil, but we buy our tankfuls of gasoline around the corner and therefore think about gas prices in local terms.  Makes sense.  But it can make us feel we're alone when it comes to high pump prices.  So I thought I'd share a few stories from around the globe.

High taxes on top of high crude prices are causing heated discussions over in Europe....

Most European countries long ago chose to heavily tax gasoline, partly to encourage use of public transportation. The British government, for example, charges $3.77 per gallon in fuel duty, and another 17.5 percent in consumption tax on top of that -- the highest levels in Europe.  According to the Automobile Association,  Britain's national average pump price for diesel hit the equivalent of $9.56 per gallon and regular unleaded hit $8.61 per gallon. (Note: A US gallon is about 4 quarts or 3.785 litres)

In Taiwan, where gas prices are subsidized and regulated, the government is hikng gas prices earlier than planned to prevent hoarding.

Motorists have been queuing up at CPC gas stations, some clutching plastic containers to buy even more fuel, after Taiwan's new government last week said it would scrap a freeze on gasoline prices from June 2.

In other countries that subsidize fuel prices...

Jakarta, Indonesia raised the subsidised gasoline price by 33.3 percent to about 6,000 rupiah (65 cents) a litre on Saturday despite widespread opposition ahead of general elections in April.

Malaysia also appears to be changing its stance on subsidies -- approaching 15 billion dollars, or a massive seven percent of GDP -- despite setbacks to the government in March elections. Kuala Lumpur is now reportedly considering a two-tier pricing system to make the rich pay more and cap the subsidy bill at more acceptable levels.

In China, while fuel prices were increased 10% last year, they continue to make it clear that prices will remain well below market rates.  Billions in subsidies will continue to flow to state-owned oil and gas company Sinopec.

I know this information won't help you much the next time you pull up to the pump.    But at the same time, someone, somewhere else in the world will also be staring at a pump wondering if anyone has it as bad.

Imagine if gasoline costs $7.00/gallon in your area.

Experts predict it will rise that high.

Obviously transportation costs will skyrocket for transporting food and goods to stores...and certainly they will pass this cost to us. I cannot imagine what things will cost then???

Once again, savings will be the mantra, but I don't believe that will be enough. We must find alternative ways to do things...conservation at the top of the list....everything from gas to food, water to electricity, etc.

What would you do to conserve?

To learn more about how you can increase your gas mileage visit http://4ourfuture.com/Tasuvus

Jon
is this legit????
"To learn more about how you can increase your gas mileage visit http://4ourfuture.com/Tasuvus"

NanoTech eeFuel® is a highly concentrated fuel additive utilizing high-tech liquid nanotechnology. Inside the fuel tank, NanoTech eeFuel® builds an exceptionally stable three dimensional lattice structure consisting of sub-microscopic nano-clusters, all evenly distributed within the fuel. These nano-clusters are physically, chemically, or catalytically active depending on the stage of the combustion cycle.

"When NanoTech eeFuel® nano-clusters reach the engine and begin to burn in the combustion chamber, they rapidly gain heat and literally explode into steam. These steam explosions generate two very significant benefits:
Larger liquid fuel droplets are broken down into smaller and more readily vaporized sizes.