The new version (pictured below) of the gas prices "pie-chart" will start appearing on Petro-Canada pumps in the coming days.  It's something we've been doing annually since 2000...when the average price of gas in Canada was 71.5 cents per litre.   A smaller pie indeed. 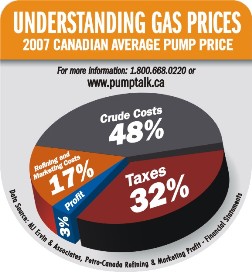 We use the Canadian Average Price for the previous year as it gives us a good solid number to work with.  We use MJ Ervin data for that and the average amount of tax paid per litre.  We then use our financial statements to determine the rest - which explains why these are developed and distributed in May.

The average price paid for a litre of regular gasoline by Canadians in 2007 was 101.8 cents per litre, which was the first year the average price was over a dollar.  In 2006, we Canadians came close with a mark of 97.7.

To those astute readers who have also watched the profit portion jump from 1% to 3%.  It now represents a profit of about 3 cents per litre compared to about 2 cents, where it stood for most of the last 7 years.

That's a bit of the story behind the pie-chart decal you've likely been staring at for a few years now.

For the 17% marketing costs, is that considered in the terms of advertising? Or marketing as in transporting the gas to stations?

Right on both counts. The industry uses the term marketing to not only mean advertisting and promotions, but actually getting the product to market. That means the Refining and Marketing portion of the chart covers all costs of operations - such as the costs of refining crude oil into gasoline, transportation, distribution charges, as well as all marketing and operational expenses at the retail level.

I think it would be interesting to have a further break down on that category. To me, advertising is a cost of doing business and should not be passed onto the consumer. Transportation, distribution, etc makes sense to me. Again, just my opinion.

when i put gas in my car at a petro outlet whose gas am i getting ?? i live in new brunswick.

your talk about 3% profit is full of gas!! Bullxxxx!

Hi
Just got back from Las Vegas, gas prices there are $3.75 per gal, which roughly translates into $1.00 per liter, taxes in.
Our price is $1.329 per liter, or removing ALL the taxes is $1.02 per liter. If crude oil is the same thruout the planet, why the difference in cost?

The 3% represents our 2007 Net Downstream Profit which is available in our Annual Report and other formal disclosure documents. On a per litre basis, it represents just over 3 cents per litre. While last year was better than most, selling gasoline is still a business measured in pennies per litre.

p.s. If you are wondering where the xx's came from, I made the edit. I think your message still gets across though.

If you purchase gas at a Petro-Canada location, you are getting Petro-Canada gas that has all the proper additives you'd expect. All gasoline sold in Canada also has to conform to national standards - plus any provincial requirements such as ethanol, etc.

As to where it comes from, t's not a simple answer. We have a refinery in Montreal, but also purchase product domestically and internationally. Pinpointing the exact location is therefore difficult. Regardless, the fuel specifications don't change and neither do the additives, such as Tactrol.

Here is why your all on this website in a short paragraph.

“why can we not have a Canadian price for gas that reflects the true cost of production and an export price that is open to the highest bidder?”

Its not the fault of the gas stations if the prices rise, blame OPEC and its member's. The reason prices go up and down is because if it goes straight up more oil will come on the market from non-OPEC member's and then increase supply, reduce prices and make them harder for OPEC to control(less PROFIT). The result is bias in the media completing the illusion with a variety of reports saying why gas went up today or why it went down, unjust controls and influences over governmental decisions and websites like these showing that their company is not the bad guy, but not being able to help us find him. The list goes on and on. We can stop rising prices by doing what the quote above says...but would it be worth giving up our Market economy to have the Government responsible for things they are not elected to be? nor capable of handling? Also, once we give elected officials that much power, who is there to stop more extreme corruptions than the one's that already exist or are believed to?

If you are spending to much on gas make changes at the individual level by using your car only when needed and as luxury when you don't feel the need to complain. Companies will follow in suit to reduce their costs in the same sense. Eventually everything will find its balance once again.

Hi , often people say that Petro is better than Esso for whatever reason. I do agree. If Petro really wants to show their good to Canadians, why not lower the price of gas , so that each time it fluctuates , daily, it is always 2 cents lower than esso. Maybe being less selfish makes a better profit.