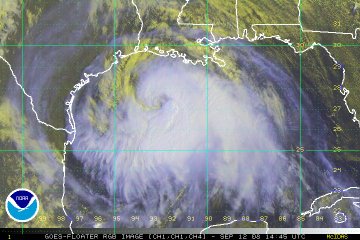 Gasoline prices have risen as the markets appear to be reacting to the impact Hurricane Ike is having on the Texas Gulf Coast, even before it reaches land.  That has raised a number of questions, which I can certainly appreciate.   So I've attempted to answer the Top 5 questions in the post below.

1. Why is Texas so important?

As the old saying goes, everything is big in Texas and that goes for the oil and refining sector as well.  According to Bloomberg, the Texas Gulf Coast is home to about 23 percent of the US oil-processing capacity.   In the Houston area alone, the refining industry can process more than 2 million barrels of oil a day into various fuels like gasoline.   That’s bigger than Canada’s total refining capacity.   The average refinery in Canada can process around 125-150 thousand barrels a day of crude oil.   Just one refinery in Baytown, Texas – the largest in North America - can process 590 thousand barrels a day.

2. But Hurricane Ike hasn’t caused any damage yet?

To protect their people and their plants, the refiners in the affected area decided to proactively close their facilities.  As a result, it’s expected that a fifth of the US refining capacity will be shut before Ike makes landfall.   Add that loss of production to the after–effects of Hurricane Gustav when 10% of the US refining capacity located closer to Louisiana was shutdown and you have a situation where US refining capacity will be at a lower point than we saw after Hurricanes Katrina and Rita.   Some of the refineries shutdown after Gustav have restarted, but the area is still not back to 100%.    As with any commodity, a lack of supply often has an impact on the markets.

3. So why does the price of gasoline in Canada go up as well?

Crude oil is a basic commodity used around the world and is traded on the same commodity exchanges as coffee beans and oranges, meaning that's where the selling price is determined.

Crude oil is then run through a refinery to make gasoline and other fuels.  Gasoline, having widespread common use around the world, is also a traded commodity.  Depending on how much of both products are available, and how much demand there is, the price to buy gasoline at the wholesale level will either go up or down.  This is somewhat complex, but relatively transparent as timely commodity information is readily available.

This often works to our advantage in Canada.  Our refining industry is small compared to the US and our population is one-tenth the size and spread out across the Great White North.   By being market based and having an open trade border between us, our industry has to be competitive with the massive and efficient US refining sector.  The downside, is when there are issues, we feel them as well.

4. If crude oil didn’t move much, why did gasoline prices jump so dramatically?

As drivers, we are used to following crude oil and watching the impact on the pump price, but we often don’t think of gasoline as a commodity.  It is.  And just like Katrina and Rita, this is a situation primarily based on what’s happening to gasoline – not crude oil.  If you watch the markets, you’d see that the gasoline price often follows the price of crude oil up and down.  That’s not always the case, but they are a bit like dance partners.  Sometimes, like today, the concern is more about the industry’s immediate ability to process the crude oil into fuel.  That’s when crude oil quickly exits the dance floor and lets gasoline take a spin on the dance floor.

5. How long will this last?

I’m not going to predict what will happen because I don’t know.  The important factor to watch will be how quickly the oil and gas sector in the eye of the storm can return to normal operations.  Refineries need power to operate, so extended power outages could be problematic.  And anyone who has experienced a flooded basement can imagine how much damage a flood of salt water could have on a large plant.   The markets will watch this closely and will react to the news – whether it’s good, or not so good.

I hope that has helped offer some perspective and understand that there may be more questions in the days ahead.   Thanks for visiting our site.

The bottom line Mr. Hamilton, with all due respect, all your answers and links to blogs and to reports with more nonsense, all boil down to the same thing.

You use whatever and whichever far flung excuse to raise prices, and then use even more retoric as an excuse as to why the price doesnt come down. Then every quarter we see every single oil company posting record profits, increasing record profits. All on the backs of people that now have to make significant life style changes just to put gas in the car to get to work.

Enjoy your nice salary provided to you by what amounts to stealing in my opion, and millions of others.

Anyone want to know what it's like to be a PR guy in a controversial industry? Check out the movie "Thanks for Smoking" (http://www.imdb.com/title/tt0427944/).

It's hilarious and very applicable to this thread!