Gas Prices: It's Only Rock and Roll... 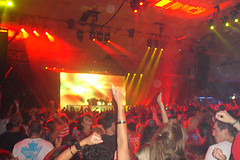 Looking back at some of the comments after the Hurricane Ike post, it's obvious there is still some work to do in explaining the three main factors that make up the price at the pump.  I compared the three layers - crude oil, wholesale gasoline and local competition - in a post last year to a club sandwich.  The picture of the big bacon-filled sandwich alone is worth a look.   But let me take another crack at it.  This time, using another of my passions - Rock n Roll.

I read Licia Corbella's editorial today in the Calgary Herald (which also appeared in the Ottawa Citizen) and she summed it up nicely:

When the Gulf Coast was bracing itself for hurricane Ike, oil and gas companies did what was environmentally and corporately responsible -- they closed down their 3,800 oil and gas platforms and numerous refineries that produce one-quarter of North America's gas. How dare they, many consumers seem to say.

Clearly, many people are confused about how gasoline prices can go up even as oil prices dropped. Here's the simplest explanation. When you fill up at the pump, you're not putting crude oil into your tank, you're pumping gasoline into your tank. They are separate commodities.

Seperate commodities.  And some local competition to boot.  They may all work differently, but the end result is always the the big price sign on the side of the street.

Three components that are not completely connected, but produce one result.  Where else would you find this?  It hit me this morning as I was stumbling on the tread mill in the hotel basement.  As the opening riff of Back in Black flowed through my earbuds and got my heart pumping, I started thinking about gas prices.  Kinda sad, yes - but the TV wasn't working.   Three components - drums, guitar and vocals coming together to produce one result.  Allow me to explain.

Crude oil is clearly the lead singer.  It gets all the press and all the attention and doesn't listen to anybody.  It's global and it's the largest component of the price at the pump. Crude oil is a basic commodity used around the world and is traded on the same commodity exchanges as coffee beans and oranges, meaning that's where the selling price is determined.

Crude oil is then run through a refinery to make gasoline and other fuels, which brings us to the next member of the band. Gasoline, having widespread common use around the world, is also a traded commodity.  Depending on how much of both products are available, and how much demand there is, the price to buy gasoline at the wholesale level will either go up or down.  So, to me, wholesale gasoline takes the stage with a guitar...or more realistically, a bass guitar.  It sits in the background most of the time, happily thumping away to the beat like Bill Wyman.  But every once in a while, it steps out of the shadows to the front of the stage for a solo, like it did during Hurricane Ike.   And like any bass solo, it's unexpected, somewhat awkward and usually short-lived.

Last, but certainly not least is local street-level competition.  The local marketplace is a competitive place as there are a number of people offering gasoline for sale in most communities...both independent and major chains.   The big price signs out front let you shop for the best price, which keeps the pressure on retailers to compete for your business.  It's loud and often volatile - like a good drummer.  The drummer drives the tempo and is often the most crowd-pleasing when it breaks into a solo - just ask Tommy Lee or Alex Van Halen.  The guitar and vocalist may be moving in one direction, but the drummer can decide to go in a different direction altogether, like a local price war.

So there you have it.  Gas prices are like a solid rock band.  The vocals (crude oil), guitar (wholesale gasoline) and drums (street level competition) can either work together or not, but they are always on stage together.  The end result can either be crowd-pleasing or jarring depending on their individual moods.  But in the end, they always take the stage as a band.

I suspect you are placing too much emphasis on "street level competition." Margins are so thin, the retailers cannot afford competition. The only way they compete is by offering loyalty rewards, discounting their confectionary products, or offering value added services. We haven't seen or heard of a "gas price war" in several years!

The retailers do not raise the price when a hurricane hits the Gulf coast, the commodity speculators and wholesalers do.

On another note, I'd like to get an explanation of reformulated or "winter" gas. What is it? When do the Canadian refieneries start producing it? What is the effect on engine performance, fuel economy, and price at the pump? Can you write a post about this?

Street level competition is just one of the many factors in the price of gas and it's relevance is well-documented. Check any Q&A on gas prices on a government website and local competition will likely get a mention.

You are right that margins are thin on gasoline. Healthy competition usually keeps margins lean in any business.

As for the retailers not putting up the price following a hurricane, that's what I was trying to express in the post. There are many factors at work. And I didn't even touch on taxes.

As for the seasonal blends, you are right on that. That's going to take a bit of work, but look for something as we head into the colder season.