Are we there yet? Lower gas prices could mean more summer road trips. 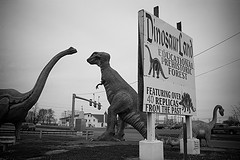 Last June, with gas prices already on a steep incline in Canada and the US,  I wrote about the potential demise of the summer road trip.  With higher gas prices, people were talking about parking the car and the family for a "Staycation".  It was a cute name and all, but unless your home has a neon sign that advertises Vacancy and Free Air Conditioning and your backyard is home to the World's Biggest Ball of Yarn, it had to be a dissapointment.   So I was happy to see signs that the road trip may be ready for a comeback.

I know I work for a company that sells gasoline, so you can question my motives, but I love car trips.  There is something special about driving for hours in a crammed and sweaty car, stopping at varioius points along the highway to get gas, eat greasy food and get your picture taken next to the World's Largest whatever...all on the same lot. So I was thrilled to stumble upon The Villages Daily Sun, which hails from a lovely central Florida retirement community with the same name.  Sure it's not the NY Times, but where else are you going to read about Tito & Elsa, who are not only husband and wife, but also competing for the 2009 Golf Jamboree.  (Spoiler Alert: Tito is sleeping on the pull-out couch tonight.)

In the same edition was a story titled 'Summertime gas prices could fuel road trips'.  It seems with gas prices much lower and much more stable than they were a year ago, people may be considering a Griswald-style trek in the Family Truckster.

So now might be a good time to plan a vacation, AAA Auto Club South spokesman Gregg Laskoski said.

“We certainly encourage people to do the type of traveling they look forward to either for spring break or a family vacation,” Laskoski said. “We’re very optimistic about gasoline prices this year, because we don’t anticipate they will be a factor in anybody’s decision-making (on) where to go and what to do.”

Sounds pretty encouraging, but any good story needs more than one source.  And they didn't have to go far...literally.

All indicators suggest gasoline prices have entered a period of stability, with market experts like Tom Mirabito Jr. suggesting that trend could continue at least over the summer.

“You’re not going to see much movement in prices until the economy rebounds,” said Mirabito, a recently retired convenience store industry executive who now lives in the Village with his wife Sharon. “Then, you’re going to see some big upticks.”

Now if you don't want to believe Tom, think about this - he did that interview knowing that not only would his wife 's name also appear in the article, but if he's wrong, he'll have to face an angry Tito and Elsa at the clubhouse.   Just ask Tito how that's working out for him.

I may need to see a few more articles before I announce the summer road trip's triumphant return, but the signs are looking good.  So if you took a pass on the road trip last year, don't be too quick to do so this year.  Your kids may groan at the thought of spending days in the car, but they'll thank you later.  Mostly likely years later, but thanks is thanks.