Home About PumpTalk Links of Interest Archives français (accueil)
You have questions? We have answers.
Let's continue the conversation…

Thanks. It's been a gas. 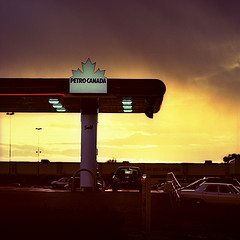 How do you say goodbye to a blog?  As you can see by the date of my last post, it's taken some time for me to figure that out.   I started writing my last post a few times, but scrapped them all as they just didn't seem to work.  Why?  Well, because even as an author, I'm just a participant in the discussion.  If I was leaving a group discussion at a party, I wouldn't go around hugging everyone while tearfully saying goodbye.   It would seem a little odd.  So let me just say a few thanks and let you keep the discussion going.

We launched this blog back in 2007 to give Canadians a chance to discuss gas pricing issues with people at an oil company.  Sadly, it's still the only one of its kind in the industry, but that's not the point.  The point is that many of you have come to have your say, ask a question or just watch it all happen.  It's been heated at times, but I've enjoyed every minute of it.  While I am moving on, the team representing this blog will be figuring out where to take it next.  I wish them the best of luck.   But before I do, a few words of thanks to the following:

The Participants - anyone that jumped into the conversation on this blog.  There were times when people would ask if some of the more personal comments bothered me.  At times, it was a little frustrating, but you can't just be open to the happy talk.  A good discussion has a variety of viewpoints and we certainly had them here.

The Very Active Participants - Phil, Robert, Rob and of course, Pedro Kanada.  You, and many others, kept me on my toes and helped raise a number of issues other people were interested in.  And while I couldn't get him to comment on the blog, I have to thank Dan McTeague for being the constant ying to my yang.   And I know you are all wondering...I still stand by everything I said even though I am no longer part of the industry.

The PumpTalk Team:  Corinn, Michael, Sneh, and the behind the scenes crew (Lorne, Lucy, Kate and Brendan).  We all learned a great deal together and had a lot of laughs.  Keep up the good work.  I also have to mention Boris, who supported us from the start and kept pushing us to stretch ourselves.   Strong leadership sure helps.

To All the People Who Asked How to Get Their Company Involved in Social Media:  I've talked to many of you who have been trying to find an "in" for your company.  Social Media at its core is about listening and talking to the people who matter most to you or your organization.  They won't all be fans, but aside from Apple, what company walks on water?  If you still need convincing, read Brendan's latest missive.  Inspriing stuff.

So there you have my best attempt at a goodbye to PumpTalk.  For those who were looking for more of a production, let me introduce you to those who do it best:  The Family Von Trapp!