I’m thinking of buying a new car. But seriously….a Zoe? 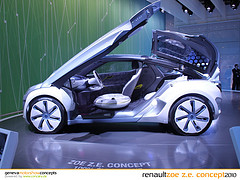 Over the years there have been hundreds of different names of car models:  Mustang, Thunderbird, Lincoln, Cadillac, Impala, Chevette, Camaro…the list is endless.
But according to Phil Martens, Ford Motor’s group vice president for production creation (quoted in “What’s in a Name?”) “Naming is one of the most arduous and crappy tasks that an organization has to do.”  And Steve Lyons, president of the Ford division agreed. ‘It’s harder than naming your children.”

French carmaker Renault is currently facing a backlash over plans to christen a new car model Zoe. Apparently, Zoe Renault, a 23 year old Parisian, is not thrilled about being associated with a car for the rest of her life.

But really, does it matter to you what your car’s ‘name’ is?  Years ago I drove a chocolate brown Mercury Monarch we lovingly called ‘Mona’.  Enough said.