Home About PumpTalk Links of Interest Archives français (accueil)
Getting Out of the Groove: Winter Driving Tips
Synthetic Oil - Making the Switch 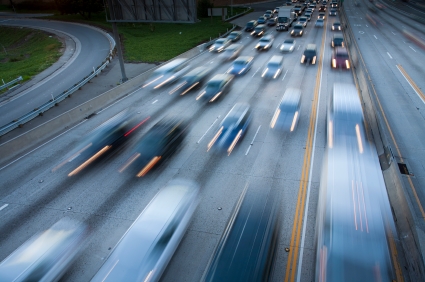 When heading out on the weekend for a long drive with my husband, I often bet with him on who is going to change lanes ahead of us. "Black Camry… 3 cars ahead, right lane… moving to the left". Seconds later, their blinker goes on and I usually have a pleased, "I told you so" look on my face. Why? I always try to anticipate drivers' moves ahead of me. I'm always looking for that little "tell" that drivers unconsciously reveal before they physically make their move, like moving towards the lane divider line in their lane, right before they decide to change lanes. Sometimes it doesn't really matter if the driver ahead of you is changing lanes, but sometimes it has a big impact. If the driver is coming over and traffic is coming to a halt - you'll need to brake earlier than you initially planned. Anticipating this can sometimes save a fender bender - or at least save your coffee from spilling all over.

Another rule I usually try and follow is to look through the driver's windows in front of me. By the time the car directly in front of you hits the brakes, it's often too late, or it's a very stressful stop! By seeing the brake lights go on several vehicles ahead of me, I can at least begin to take my foot off the gas and anticipate that my next move will be braking. Sometimes this actually works to my advantage when I'm behind a "brake happy" driver (my nickname for someone who is constantly tapping their brakes because they are unsure about when to brake). In this instance, I can at least see what the vehicles ahead are doing and make a decision whether to brake or simply take my foot off the accelerator. In highway traffic, to and from work, this has saved me from purchasing a new set of pads and rotors earlier than expected!

Driving with a set of assumptions can also help dealing with particular driving situations and reduce road rage:

The last minute merge. We know that the right lane on the highway is for merging. So instead of getting upset when the vehicle in the lane beside you realizes they have run out of space to merge and cuts you off, assume that this is going to happen. It's a good idea to just move into the middle lane (if possible, of course) and let these mergers have as much space as they require instead of getting frustrated. Check out another PumpTalk post on "lane etiquette".

Lane ditching. Often in heavy traffic, you'll find drivers constantly surveying each lane to see which one is the fastest at any point in time. Remind yourself that if you are in a lane that is moving and there is a lane beside you that is significantly slower, you'll more than likely run into the "Lane Ditcher". This driver is going to pull into your lane at the last possible second, probably just as you are approaching. Assume that if you are in the lane that is moving faster than others, someone is going to hop on over. Be aware of these drivers and be prepared to slow down if they decide to hop in your lane right in front of you. I usually like to let my foot off the accelerator and be on guard in situations like these. I've had many moments where I've had to hit my brakes or swerve because of these "lane ditchers".

You can check out more defensive driving tips here.

What are some of the ways you anticipate your fellow driver's next moves?