Home About PumpTalk Links of Interest Archives français (accueil)
Air Filters - The Auto Part That Helps Your Vehicle Breathe Better
Gas Pricing: What Factors Affect the Prices You See At The Pump

How Much is Left In Your Fuel Tank When your Fuel Gauge reads "Empty"? 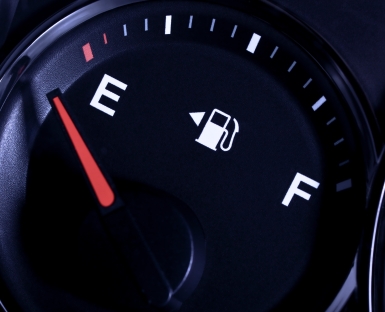 I was rewatching the 1994 romantic comedy Only You this past weekend and one scene in particular was the catalyst for this week's PumpTalk post.

Hot on the heels of the mystery man she thinks is her soulmate, protagonist Marisa Tomei and her sidekick Bonnie Hunt run out of gas in the Italian countryside. They bicker about which of them misjudged how much gas it would take their cute rental car to get from Venice to Rome. Despondent, the ladies go off to drink wine in some ruins. While they make up - spoiler alert! - a truck full of nuns come along, find their abandoned car and fill the tank with enough gas to get them to the nearest town.

The movie got me thinking about two things. One, I decided I needed to revisit the oeuvre of Robert Downey Jr. and two, I started to wonder "How much gas is actually left in your tank when the fuel gauge needle hits 'Empty'?" Does "empty" mean "empty"? Or, as the old saying goes, does "E" on your fuel gauge mean "Ehhh, there's a little more gas in there"?

The answer is "It depends." What's left in your fuel tank - and how far you can get on it - depends on:

In most vehicles, when your fuel gauge is on "E", you probably have a few litres left. Most auto manufacturers create the fuel tank with an optimum "empty reserve" in mind - because they know that consumers don't really want their cars to sputter and die when the needle hits "E". In fact, auto manufacturers deliberately calibrate fuel gauges to give consumers the sense that they're getting excellent fuel economy - which is why your fuel gauge often reads "Full" for an extended time before it drops quite quickly to a half or quarter tank. In a sense, the E is like the snooze button on your alarm clock - you know that you should fill up when the alarm goes off but you *might* be able to get away with ten more minutes.

If you're really curious what's left in your fuel tank - but you're not keen on damaging your fuel pump or running out of gas in the middle of nowhere - you can try this investigative technique:

It's nice to know that your fuel tank isn't completely dry when it reads "Empty" but consistently running your car when the fuel tank is low can lead to fuel pump damage. The pump relies on fuel running through it to keep it cool - when you're consistently out of gas, the pump can overheat, resulting in potentially costly repairs. So it's best not to hold out for nuns to come by - fill your car regularly and try to keep it at least a quarter full at all times.

For a technical explanation of the interaction between your fuel gauge and your fuel tank, check out this piece from How Stuff Works called, “How Fuel Gauges Work”.

Have you ever tried "defying" your fuel gauge?