Slow Down and Save? 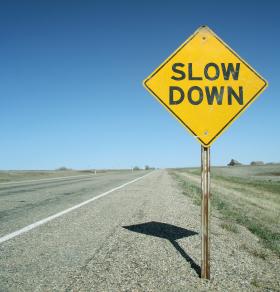 As we mentioned in our first PumpTalk post this year, PumpTalk isn't the only blog on Suncor's roster. The Oil Sands Question & Response blog (or OSQAR) is where members of the communications and sustainability teams write about topics related to oil sands development, sustainability and energy literacy.

We thought the most recent OSQAR post, 'Is Slow the New Fast?' had an interesting connection to PumpTalk because it included some interesting information about a new movement around slower driving - which has a positive effect on fuel efficiency.

The 90kmh Economy DriveTM  is a movement that aims to promote safer driving, increased fuel efficiency and reduced pollution by having drivers choose to slow down to 90kmh (vs the usual highway speed limits of 100 or 110 km/h). What are the benefits of this behaviour? As OSQAR says:

"In explaining its slow driving proposition, the people behind the 90kmh Economy Drive point out that 90 kilometres per hour (or 55 miles per hour) is, in fact, the average optimum speed for maximizing automobile fuel efficiency, and each eight km over 100 kilometres per hour can reduce one’s fuel economy by seven to eight percent. By easing up on the gas pedal, advocates argue, not only will you save gasoline and money at a time of high gas prices, you will also help curb greenhouse gas emissions (GHG) from transportation, which, in Canada, accounts for more than a quarter of the country’s GHG emissions."

I like the idea of all of us slowing down on the road - it would definitely feel safer and saving on gas and emissions is always good. But I admit, there are certainly times (generally towards the end of those long road trips) when I am pleased to take advantage of that 110 km/h speed limit. What do you think? Will you slide into the slow lane and join the 90kmh movement to save on fuel and reduce pollution? Or do you feel the need for speed?

Personally, no I don't slow down to save money on gas, especially when the freeway is clear and open. Nothing wrong with people slowing down as long as they don't go into the fast lane and hold everyone else up.