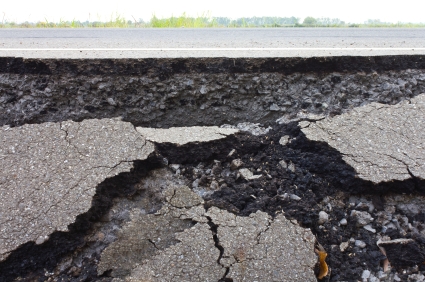 Potholes you could lose a child in - streets so jammed it takes 45 minutes to drive 1 km - we all have local roads that drive us a little crazy. For the last nine years, the Canadian Automobile Association (CAA) in Ontario has held an annual Worst Roads survey. This year, they expanded the campaign to other CAA clubs to have drivers vote on the worst roads in Atlantic Canada (P.E.I., New Brunswick, Newfoundland Nova Scotia), Manitoba, Saskatchewan and British Columbia. And the results are in!

Newfoundland's Highway 360 near Harbour Breton took home the prize for Worst Road in Atlantic Canada and the title of Saskatchewan's Worst Road went to Highway 22 near Earl Grey.

I wasn't surprised to find that Dufferin Street in Toronto was at the top of the Worst Roads in Ontario - I used to live on Dufferin Street and have an intimate knowledge of its many potholes. For BC, I was pleased to see the George Massey Tunnel in Richmond was included on the list of British Columbia's Worst Roads. Even though it didn't take the top spot - that honour went to Kelowna's Westside Road. Just reading the list, I felt a flicker of the white hot rage I experience every time we try to get through that tunnel on the way home from the ferry. It's nice to know that I'm not alone in my disgruntlement!

Of course, the idea behind the CAA's Worst Roads survey isn't just for drivers to commiserate over terrible driving conditions. “CAA’s Worst Roads Campaign reinforces the importance of road infrastructure in Ontario. Through their votes, Ontarians have the opportunity to highlight roads across the province that are in urgent need of improvement, and CAA shares the results with government at the municipal and provincial level,” says Elliott Silverstein, Manager government Relations, CAA South Central Ontario.

Most of the roads on these four top ten Worst Roads lists ended up winning based on excessive potholes and crumbling pavement or, as in the case if the Massey Tunnel, terrible traffic congestion. Poorly timed streetlights also helped a few of these roads to their spots in the top ten.

Thanks to the findings in the CAA'S yearly survey, several of Canada's previous "worst roads" winners have been improved (or are slated to be improved). That means this could be your year, Dufferin Street! Fingers crossed.

Is your pick for worst road in your area on this list? If not, which are the worst roads where you live? Leave your worst road nominees in the comments!