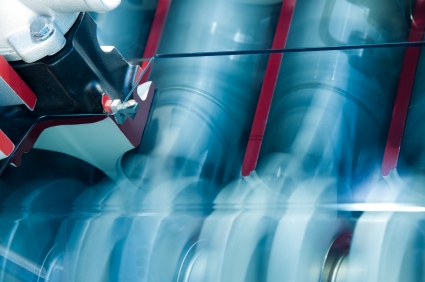 Today's vehicle maintenance post is about fuel injectors and why keeping them clean will help keep your vehicle as fuel efficient as possible.

As its name suggests, the "fuel injector" injects a metered amount of fuel into your engine by spraying fuel directly into the cylinder (some vehicles have slight variations on this theme, but the premise is still the same). Each fuel injector corresponds to a cylinder in your vehicle. If your vehicle has four cylinders, then it has four fuel injectors.

Since your fuel injectors' job is to shoot gas into your engine, keeping them clean has a big impact on your fuel efficiency. It doesn't take a lot to get fuel injectors dirty as they are such a small part. A fuel injector is only about 3 inches long, so any little piece of debris can clog it. Clogs in your fuel injectors can not only cause poor gas mileage, but can also cause your engine to misfire, idle roughly or even cause hesitation when you step on the accelerator. Clogged fuel injectors have also been the cause of many a failed emissions test.

For all these reasons, it's a good idea to give your fuel injectors a little love once in a while. You don't have to clean them as often as you change your oil, but you should perform a fuel injector flush every 50,000km to 90,000km. A fuel injector flush uses a super concentrated cleaner, which runs directly through the injectors to clean out all the gunk, debris and deposits that may be slowing your engine down. As always, you should review your owner's manual or vehicle maintenance schedule to see when your particular vehicle generally requires fuel injector maintenance. By performing this maintenance on your vehicle regularly, you can ensure that your engine is performing its best.

The good news about fuel injectors is that keeping them clean is a worthwhile investment. Unless they've become damaged somehow, you should not have to replace them for the life of your vehicle. That's a good thing, because on average, each fuel injector can run you about $500.

Keeping a well maintained vehicle can not only help prolong its life, but it can also help you achieve better gas mileage and fuel efficiency. And that’s always a plus for us!

Posted at 04:27 PM in About Your Car, Fuel Efficiency, Vehicle Maintenance | Permalink | Comments (1)

Always nice to read your blog.
Different view and an own opinion about car maintenance. Thanks for suggestions.