The Dying Art of the Courtesy Wave 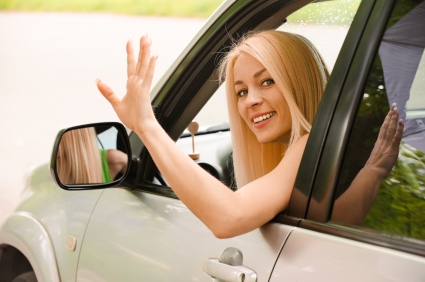 You're in a long line of traffic, thanks to some construction on the shoulder. You've been waiting your turn like a good driver and you're seconds away from escaping the bottleneck and hitting the open road. Out of the corner of your eye, you see some guy zipping up the right lane, bypassing all of the other (more patient) drivers as he zooms to the head of the line and then tries to sneak his way in. Your car is the next to go through and you vow not to let this line-cutter in, but before you know it, the guy has nudged the hood of his vehicle into your lane and there's no way you can go unless you let him go first.

You hate this guy with a fiery passion. As he pulls ahead of you, you say something very rude out loud to yourself about his poor driving etiquette. And then…just as you're thinking about the desert island you'd like to send all jerky drivers to, it happens. The guy waves. And suddenly, you think "Ehh. Well…at least he WAVED." The rage abates and you drive on, feeling like the bigger person. Good driving karma increased!

As we discussed in our post about horn use, communication between drivers can be challenging. We seem to have several ways of communicating our displeasure (mainly horn and unsavoury hand gestures) but very few ways to say "Thank you for being courteous" to our fellow drivers. The courtesy wave is one of the most important tools in a driver's repertoire and using it can defuse all manner of road rage situations. Good driving karma is not always rewarded but acknowledging someone else's courteous behaviour encourages them - and you - to continue driving politely.

Sadly, the courtesy wave does not get used as often as it should. When we're out driving, "NO WAVE??" is exclaimed incredulously more than once as we get cut off or wait politely for other drivers to proceed. Why are we not all waving? Have we forgotten the art of the courtesy wave? In case the answer is "yes", here's a "when to wave" refresher:

You arrived at the intersection at the same time. You're both inching forward. Finally, one of you generously gestures that the other driver should go ahead. This is more of a waving someone through the intersection motion rather than a thank you wave, but you get the idea. Ideally, the motion should be an underhand gesture that says "The road is yours, my friend" rather that the overhand shooing gesture which says "All right, all right, let's go already."

Wave when someone lets you into their lane

When traffic is heavy and you're dependant on the kindness of strangers to let you change lanes, a courtesy wave is a nice way to acknowledge the other driver's sacrifice. Often, when there are two of us in the car, we both give a thank you wave, for maximum karma points. Probably the most adorable courtesy wave we ever received was when a mom and all four kids in the minivan waved when they pulled in front of us. Oh, mom in the minivan - all is forgiven.

When another driver goes out of their way to slow down and let you turn on to the street, this warrants a particularly kindly wave, one that says "I know you have places to get to. Thank you for stopping for a moment so that I can turn on to the street safely. You are a good, kind person." This should be a vigorous back and forth wave lasting approximately two seconds.

In our neighbourhood, people like to dart out into the road just for fun, so we make it a habit to drive cautiously. When someone does do us the courtesy of waiting to see if we'll stop, we usually do and then give them a polite "Yes, I see you!" wave to let them know we won't mow them down.

As a pedestrian, I've also started to give a friendly wave when a driver stops for me to cross the street in my residential neighbourhood - mainly because they have no idea how long it will take for my ageing dog to amble comfortably across the road. As they sit there fuming, wishing that they'd just barrelled through the intersection, I always hope they remember that hey - at least I waved.

It turns out I'm not the only person obsessed with the courtesy wave. If you're keen to track and treasure all of your courtesy waves, you can always join a new Calgary-based site My Road Waves, where you can swap stories of courteous - and not so courteous - driving encounters in a safe, non-vehicle environment.