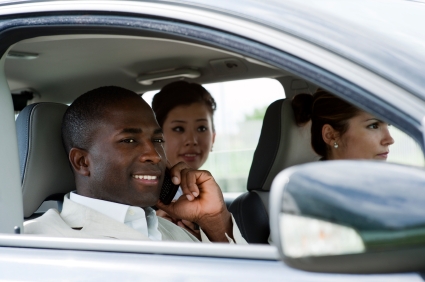 When traffic is moving slowly, there are few things more satisfying than realizing your two-occupant vehicle is allowed to drive in the much less congested HOV (High Occupancy Vehicle) lane. While some feel that HOV lanes are only contributing to urban sprawl and are ultimately encouraging more car use, most commuters who carpool find that HOV lanes shorten commute time and reduce per-person emissions, which helps with air quality. Plus, carpooling helps you save on fuel - so everyone is winning!

HOV lanes were first introduced in North America in the late 1960's, initially as "bus only" lanes. The definition of "HOV" was broadened to include carpools with four or more occupants in the early 1970's. In cities like Los Angeles, where gridlock is legendary, HOV lanes have been helping transit users and other carpoolers save up to 45 minutes per day on their commutes since 1973. And even in smaller cities like Ottawa, HOV lanes have made a big difference to both transit and car commuters, helping to reduce traffic congestion and improve air quality.

Driving in the HOV lane can feel like a magical ride, especially when you're gliding by other drivers stuck in traffic. But it's important to remember that with great HOV comes great responsibility. Here are a few tips on HOV lane use:

The HOV lane is not the "faster than fast" lane. We're all conditioned to think of the left-most lane as the "fast" or "passing" lane. Since most HOV lanes are on the far left, some drivers use the HOV lane as their personal passing lane, ignoring the solid line on the road that indicates no changing lanes. Many of these same drivers also like to speed up when they hit the HOV lane as if they're on the track at NASCAR, rocketing up behind other HOV lane users and then angrily passing them on the right. This is not what the HOV lane is for, guys.

Keep an eye out for your exit - it's coming sooner than you think. One of the challenges of driving in the HOV lane is getting out of the HOV lane. Entrances and exits to the HOV lanes are clearly marked to help improve traffic flow and safety, which is great - and some HOV lanes feature exit ramps which eliminate the need to cross over the remaining lanes of traffic to get to your destination. But not all HOV lanes have that handy feature. You may have to plan your route carefully so that you can leave the HOV lane and reach your exit in a safe and timely manner. Start to make your move well before your exit in order to avoid getting trapped.

Two may not be enough. In many HOV lanes, two occupants counts as "high occupancy". But in some areas, three occupants or more occupants are required - and your dog does not count. If you're driving in an unfamiliar city, make sure to double check the HOV lane signs to make sure you're allowed to make the move to the HOV lane.

It's not all HOV all the time. In some areas, HOV lanes are only during rush hours - during the rest of the day, the HOV lane is available to all. So before you have your passenger call the city to angrily report someone violating the rules of the HOV lane, check the signage to make sure you're still within the HOV-only hours.

Even if there's no HOV lane on your daily commute, carpooling is a great way to save on gas and help reduce your carbon footprint. It may not be a practical choice every day, but even carpooling a couple of times a week can make a difference to your gas savings - plus, it's your ticket to that sweet HOV lane. Check out Carpool.ca for carpool etiquette and other tips on starting to carpool.

Do you use the HOV lane on your morning or afternoon commute? Does it make a difference to your day? Share your HOV stories in the comments!