Why do some countries drive on the left vs. the right? 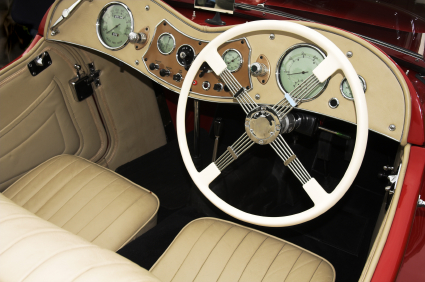 I'll never forget the shock I experienced on my first trip away from North America, when I tried to cross the street in Dublin, Ireland. I nearly got mowed down by a car I didn't see coming - because I was looking the wrong way down the street.

I was aware that drivers drove on the left in the UK - but force of habit had me looking in the other direction. All of that driving on the left was quite unsettling to someone with my poor sense of spatial relations - I mean, even the steering wheels were on the "wrong" side! I was relieved when I went to Paris for a few days and everyone was driving on the right again, the way nature intended.

This handy world map illustrates which countries drive on the right (red) and on the left (blue). 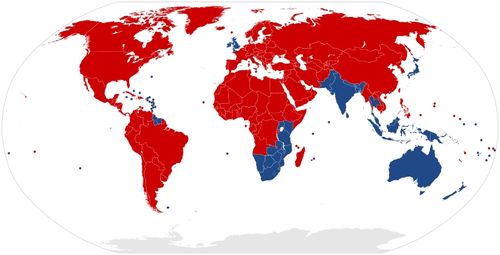 How did this split between left-hand and right-hand driving come about? Why couldn't we all just pick a side?

The prevailing theory is that the Romans first started the craze for riding on the left side of the roads, mainly for defence. Like today, most folks back then were right-handed and wore their swords and scabbards on the left. By riding on the left, soldiers could hold their reins in the left hand and wield their swords in the right if they encountered any trouble on the road.

Riding on the left was common (and, in some places, the law) until the late 18th century, when, in countries like France and the US, farmers started driving large loads on big wagons pulled by several horses. The wagon driver would sit on the back left horse to keep his right arm free to drive the teams, so he would keep to the right of the road to avoid getting into accidents with oncoming traffic.

Right-handed driving soon caught on in the US - and, as Napoleon conquered vast swathes of Europe, he enforced France's new right-handing driving style wherever he went. But in places like the UK and their various colonies (India, Australia, much of the Caribbean, Canada) driving on the left remained the norm.

Over time and through both World Wars, as various countries claimed their independence (or were occupied), rules about which side of the road to drive on continued - and continues - to shift. For more background, this article contains a fascinating run down of the history and origins of left vs. right-hand driving.

A few fun facts about right vs. left hand driving history include:

While the world may one day be united on which is the "correct side" to drive on, the immense cost of changing infrastructure to accommodate driving on the opposite side is prohibitive in today's economy. So for now, best to consult these lists of right- and left-driving countries before you head out on your next driving adventure.

Check out this right- and left-hand traffic article for more about the mechanics of right vs. left-hand driving and specific regulations in each country.

Have you ever driven on the "other" side of the road? Do you own a car with right-hand-drive in a left-hand-drive world? Share your travel tales in the comments!

This handy world map illustrates which countries drive on the right (blue) and on the left (red).