Home About PumpTalk Links of Interest Archives français (accueil)
History of Driving in Canada, Part I
Spring Into Car Care

Last week, we talked about some of the earliest driving developments in the 20th century - as the 20's came to a close, car sales were booming and the construction of an infrastructure to support these vehicles was in full swing. Gas stations, paved highways, service stations, not to mention motels and truckstop diners, were all created to cater to this new way of traveling. 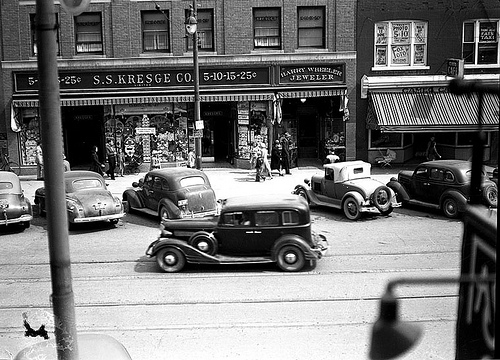 Once the Great Depression hit in 1929, the impact on driving was huge. Road development pretty much halted and car sales plummeted - which was especially problematic for Canada given that we were the second largest manufacturer of motor vehicles in the world.

The average cost of a new car was $600 in 1930. Given that the average annual salary was $1000, cars definitely became a luxury item at a time of economic uncertainty. Tires alone cost $3.69 - more than a dollar more than the average worker's daily pay.

As it was in the early days, driving once again became a hazardous pursuit in some areas during the 1930s, as road maintenance was greatly reduced and few new roads were being constructed. Once World War II began, many of the better paved roads were almost destroyed by the heavy war time traffic and car manufacturing took a back seat to war time industries.

Tough economic times may have slowed development in some areas, but in others, innovation continued - the first car radio was introduced in 1930 (although it wasn't standard until 1950). The first car radios were not available from car manufacturers and had to be purchased separately. 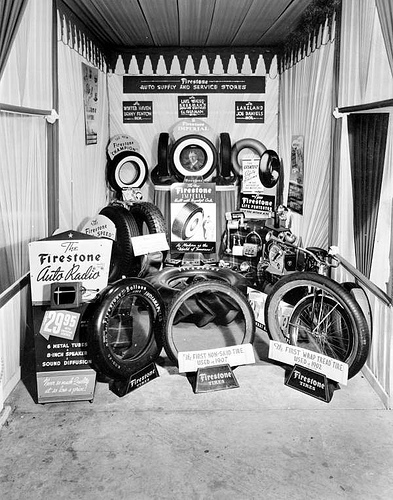 Photo: State Library and Archives of Florida on The Commons

The car radio itself was invented by American Paul Galvin, the head of Galvin Manufacturing Corporation. Since his invention combined motion and radio, Galvin came up with the name "Motorola" for the company's new products.

Buick also introduced an innovation in 1938 when it started to offer the first electric turn signals on its vehicles as a "new safety feature". It was an idea that really took off - and hasn't changed much since its introduction.

Having a reliable heater in your car was pretty rare until the 1930s. Early vehicles were open to the elements or boasted a flimsy canopy, but with enclosed cars and advances in interior comfort came big changes in driving fashion. The big coats, lap robes and goggles of early motorists were changed for more appropriate interior car-wear - driving shoes, car coats and thin gloves.

Once World War II ended, driving culture took off again - the post-war boom meant highways were being built all over the country, including the mighty TransCanada, which began construction in 1950. Cars became more affordable and, as the suburbs began to sprawl out from the cities, driving became de rigueur. In 1950, Canada's first park-and-shop mall opened in Vancouver, kicking off a new trend in urban shopping.

After several decades of driving - and with millions on the road - safety became a real concern. Volvo was the first to introduce seatbelts in its vehicles in 1959, which became standard in most vehicles in the 1960's. Canada's Motor Vehicle Safety Act was established in 1971 to create safety standards for cars in Canada.

For more fascinating information about driving history in Canada, be sure to visit the Canadian Science and Technology Museum's timeline In Search of the Canadian Car.

Do you have driving history facts to share? Leave them in the comments!