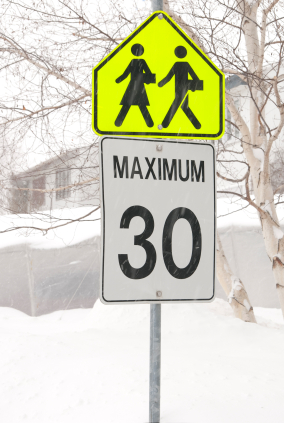 The older my dog gets, the longer is takes for us to cross the street in front of my house. We live in a residential area, but cars just whip along that street like it's the straightaway at the Indy 500, unencumbered by stop signs. I'm not the only neighbourhood resident who's had to leap out of the way of an aggressive driver who couldn't be bothered to slow down.

This morning's near-death experience got me thinking about speed limits - specifically how are speed limits arrived at?

How is the speed limit determined?

Speed limits are determined by traffic engineers, who take several factors into account, such as:

Another factor traffic engineers consider is something called the 85th percentile rule (i.e. the speed at which 85% of drivers on a certain stretch of road are travelling). Traffic engineers compile all of this information to determine a speed limit that will optimize traffic flow and minimize accidents.

Most of us would agree that speed limits in towns and cities are pretty reasonable (except the one on my street, which is clearly too high for our sleepy neighbourhood). But when it comes to the highways, some argue that the speed limits are too low, especially compared with some areas of the US and Europe.

Then again, there's the 90km Economy Drive movement, which we wrote about last year in our post Slow Down and Save. The 90kmh-ers argue that driving 90km/h maximizes fuel efficiency, decreases emissions and makes the roads safer.

What do you think? Does raising the speed limits in certain areas seem like a good idea? Or does driving at Autobahn-type speeds seem unsafe? Let us know in the comments!

I like the idea of a 90 kmh maximum. Anyone who has been in an accident knows that there's a strong correlation between speed and the severity of injuries. Slower speeds are also better for the environment.

At the same time, driving 60 km/h uses even less gas than 90. However, at 60, half the number of cars will make it through a given stretch of the road as at 120. So, what is the reasonable decision? If fuel efficiency is your concern - speed limit is not speed mandate. You are free to go as reasonably slow as you want, just stay to the right. But for people that value their time more than a price of gas - it is now a criminal offence to go above 100, even though most of the world has agreed 120-130 is the reasonable speed. Most of Europe has limits between 120 and 140 km/h.