Home About PumpTalk Links of Interest Archives français (accueil)
Is Your Car Safety Kit Ready for Long Weekend Travel?
Distracted Driving: Why You Should Strive to be a Uni-Tasker in the Car 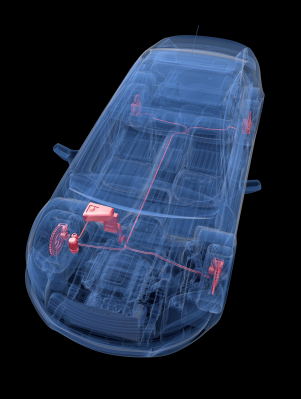 I'm lucky in that the only head-on vehicle collision I've ever been involved in was the time I drove a golf cart into a palm tree in Phoenix, Arizona in 1985. I was 10 at the time. The cause of the crash? Failure to apply the brakes in a timely manner.

My failure to brake is not uncommon. According to the Insurance Institute for Highway Safety, 40 percent of drivers fail to hit the brakes in time when they're involved in a crash. The average driver takes just under a second to recognize an urgent braking situation and that may not be enough time for them to stop their vehicle before a collision takes place.

In the past, we had to rely on seatbelts and airbags to reduce injuries in case of collisions but over the past few years, vehicle technology has made great strides in more active safety systems. Several vehicle manufacturers are now rolling out vehicles that make up for our slower animal reflexes with crash avoidance systems like intelligent braking.

These brake systems not only warn drivers of impending collisions but can also hit the brakes themselves, without you even applying the brake pedal.

According to this article in the Globe and Mail:

"Most manufacturers have their own technology, whether developed internally or by a supplier. But they all depend on input from a variety of sensors – radar, video cameras, ultrasonic and even GPS technology. This information is analyzed to determine if objects in the path of the vehicle, fixed or moving, are a threat. Most systems depend on the same input and information used for active or adaptive cruise control systems, which determine if the speed of the vehicle is greater or less than that of the vehicle in front. If that input indicates a significant speed differential, resulting in a likely collision, the brakes are applied, without any driver input."

I have to say that these intelligent braking systems would have been useful back in 1985 when my parents had to pay for my golf cart accident. And they could be real lifesavers on the road - perhaps not in every circumstance but certainly in situations where driver distractions or poor judgement would have resulted in an accident. But, as with many of these new driving technologies, I would worry about the danger of becoming complacent and further degrading my mad driving skillz by letting my car do all the work.

Still, as the article states:

"The IIHS estimates these systems can prevent or lessen the impact in 1.9 million crashes a year – reducing injury to 66,000 occupants and the deaths of almost 900 others – in the U.S. alone."

Does your vehicle have "smart" brakes? Do you think they're a good idea? Sound off in the comments!

This sounds intriguing but I'm concerned about a computer glitch turning this dreamy smart brake scenario into a nightmare. Smart brakes are only smart when they work. My brother is a car mechanic and his mantra is to keep it simple.