This week, I thought we could do the ultimate #ThrowbackThursday here on PumpTalk by going back a few million years, to when dinosaurs roamed the earth!

When I was a kid, I was told that oil was made from the remains of dinosaurs, which is why it's called "fossil fuel". Turns out that this is a myth - the bacteria, plant and animal organisms that formed oil existed even before the dinosaurs.

But a few years ago, oil and dinosaurs had an actual reason to be associated - an extremely rare dinosaur fossil was discovered at Suncor's Millennium Mine. Recently, the story of the fossil find was featured on Daily Planet and we posted this about it over on the OSQAR blog:

"In 2011, Suncor came across something a little less expected at its oil sands mining operations – a dinosaur! Thanks to the sharp eye of one of our employees, Suncor made history with this amazing find. Watch as Discovery’s Daily Planet explores what it took to extract the dinosaur fossil from Suncor’s Millennium Mine and what this rare find unveils about Alberta’s pre-historic times." 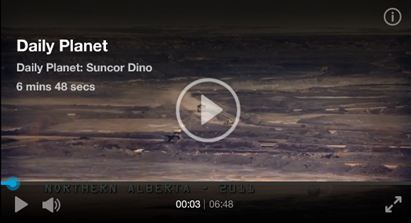 Were you a big dinosaur fan as a kid (or are you still one)? Let us know in the comments!

I think it is to Suncor's credit that they stopped production in order to aid the Tyrell Museum in excavating Mrs. Prickly. Thanks for sharing this video! Very inspiring!