Home About PumpTalk Links of Interest Archives français (accueil)
Monthly Poll: Do you eat in the car?
Gearing Up for Seasonal Car Shopping – or Selling 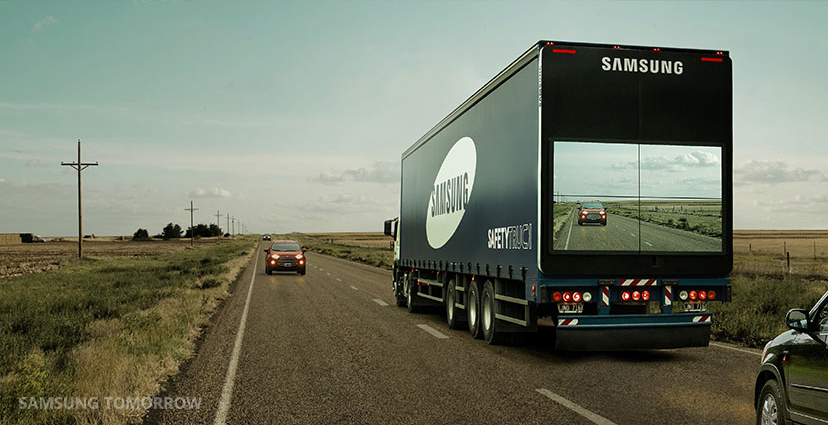 I live near the Port of Vancouver, so getting stuck behind 18 wheelers is a regular thing. Sometimes it’s frustrating, because you can’t see what’s going on in front of them – and sometimes it’s dangerous for the same reason. But this prototype “Safety Truck” that Samsung recently tested in road-accident-prone Argentina might change the way we interact with transport trucks on the road.

From the Samsung blog:

“The Safety Truck consists of a wireless camera attached to the front of the truck, which is connected to a video wall made out of four exterior monitors located on the back of the truck. The monitors give drivers behind the truck a view of what is going on ahead, even in the dark of night. This allows drivers to have a better view when deciding whether it is safe to overtake. Another advantage of the Safety Truck is that it may reduce the risk of accidents caused by sudden braking or animals crossing the road.”

Check out this video of a “see-through” truck in action.

Personally, I love this idea; even if passing a truck isn’t on my agenda, being able to get a clear view of what’s ahead would be helpful on the road (even if what’s ahead are more big trucks). But some argue that the screen might encourage drivers to stop leaving adequate distance between them and trucks (in the video, for example, the cars passing are dangerously close to the trucks). Another argument is that the screens might mesmerize drivers so that they try to drive through the truck. The technology would certainly take some getting used to.

The truck in the video is just a prototype and Samsung says they’re working on next steps with driving safety NGOs and government to try and have this technology adopted more widely.

What do you think? Would a “see-through” truck improve driving safety or would it potentially cause more problems that it solves? Share your thoughts in the comments!