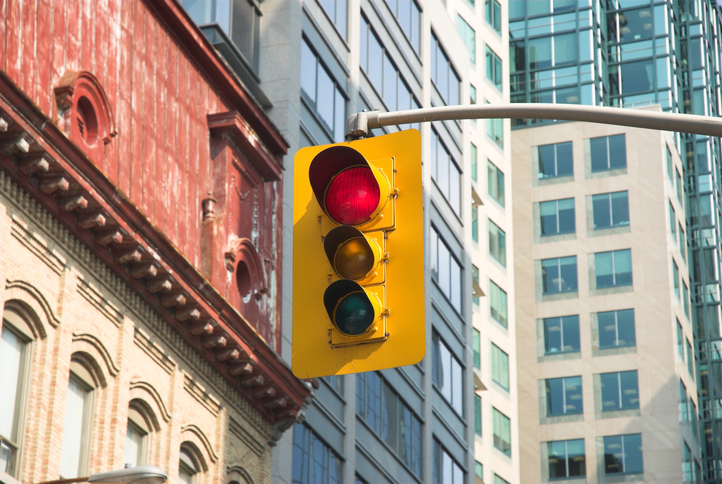 One of the things I do to keep my sanity when I commute is to celebrate the little victories: someone unexpectedly letting me merge, the line at the drive-thru coffee place not having a 10-car wait and not hitting every single red light on my way from my house to the highway. This last one is really the unicorn of commuting events - it almost never happens. And, like a lot of you, I think to myself as I'm sitting at the umpteenth red light in a row, "We can put a man on the moon; why can't they just sync these lights up?"

Well, it turns out they CAN sync them up. The City of Toronto is piloting two traffic light systems that use different implementations of artificial intelligence to adjust traffic signals in real-time, ideally reducing congestion, idling and ultimately, emissions, during peak use hours.

One of Toronto's pilot systems uses video cameras to measure car queue lengths at the approach to an intersection and then makes decisions about traffic light timing. The other system uses radar detection that measures traffic flow upstream and downstream of the intersection to make similar decisions. Toronto's pilot program started in November 2017 and is expected to run through 2018.

The City has not made results available yet, but the systems being tested are similar to a smart traffic light system that was implemented in Pittsburgh, Pennsylvania in 2012. Since the initial implementation, Pittsburg has been increasing their smart intersections over the last few years to a total of 50 intersections, with another 150 planned by 2020. So far, Pittsburgh has seen intersection wait times fall by 40%, journey time fall by 25% and emissions from idling cars on these commutes reduced by 20%.

This video features an interview with Stephen Smith, Director of the Intelligent Coordination and Logistics Laboratory at Carnegie Mellon University, where the smart traffic light system in Pittsburgh was first developed.

What do you think? If you're in Toronto, have you driven the route where these traffic lights are in place? Have you noticed an improvement in your commute? Would these work in your city? Let us know in the comments!