Home About PumpTalk Links of Interest Archives français (accueil)
Celebrating Indigenous Achievement and Leadership
Honking Around: Behind the Scenes with Penelope and George

Fighting Pot Holes One Tap at a Time

In classic Dickensian form, Vancouver is a tale of two cities in the spring. One Vancouver is beautiful, full of streets lined with different species of cherry trees, bursting into bloom. The other Vancouver (like a lot of Canadian cities in the spring) is Gotham-gone-wrong, full of streets dotted with pot holes. I encountered both Vancouvers on my way home from the dog park on Sunday - so enchanted with the first round of cherry blossoms that I bounced into a pot hole. No damage to the car (thankfully), but I thought I should do my civic duty. So I pulled over, got out of the car, whipped out my phone and opened the VanConnect app. Vancouver, like a lot of cities across Canada, has a municipal app where citizens can request services or report issues.

Not too sound too much like a geek (or a neighbourhood busy body), but I love the VanConnect app. I've used it to report a burned out street light on our block, request that some low-hanging branches be removed from trees on our boulevard and renewed our dog's license. All from the comfort of my phone. And now I can report this pot hole. When reporting, the app first geo-locates me. I can then attach a photo, a description of the pot hole and fill in specifics of its size and depth. Takes 2 minutes. The app also has a stream of recent requests you can check out too see what else is being reported around the city. Now that I've reported it, the City will also send me updates. And the timing on those vary. The street light bulb was replaced within a week; the tree branches took a month. 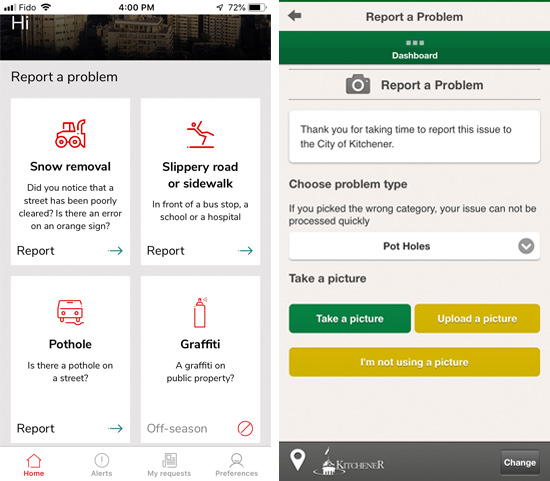 I browsed the iOS app store and found several for cities and towns across Canada; a couple that stood out: Montréal's Resident Services App and Kitchener, ON's app that is built on the Pingstreet platform (a popular municipal app platform for smaller cities in Canada). These apps are such handy way to report issues, but also to stay informed about what is happening where you live. Are you using a municipal app to report pot holes or other municipal issues?